This post was originally shared on Chantal Saville’s Blog

When I was born in 1972, there was no maternity leave. No benefits, no time off.

My mom, being the primary breadwinner in our house, would have been in a really bad position if it had not been for her ability to negotiate to take the summer off from work AND to plan my birth for Spring. She’s really something, my mom. I honestly think that she could affect the earth’s rotational axis, if she really put her mind to it.

But a few months later, she had to find someone to take care of me. There was no Internet back then, no way to quickly find a database of potential candidates. Daycare? Not so much.

Through French au pair girls and a variety of other people, she was able to piece together a childcare system that worked most of the time. After I started preschool, she found this wonderful woman named Nancy. Actually, she had found her daughter first, but Andrea didn’t want to continue babysitting so her mother offered to take over: after school and during holidays.

Nancy became a second mom to me. She was so important in my life. She introduced me to fruit cocktail. She watched Mighty Mouse with me, every afternoon. We weeded her garden and she didn’t say anything when I yanked out handfuls of non-weeds! Her husband John used to tease me about my speaking in French some of the time, though neither Nancy or John spoke a word of it. 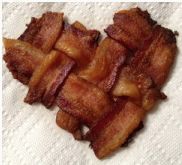 Except ‘cochon strips’. John always joked that we would have scrambled eggs and cochon strips for lunch (bacon, in case you didn’t get it). To this DAY, my actual mom and I still call them that, using awful fake French accents.

She included me in many of her life events, including her daughter’s wedding. She even made me a beautiful dress to wear. For HER daughter’s wedding: as if she didn’t have enough to do, she took the time to do this for me.

I was sad the day I stopped going to Nancy’s — Mom had started freelancing from home — but we kept in touch. She always called on my birthday and we visited on occasion. She came to the first ever Christmas party that we had at my parent’s house. When Pierre and I got engaged, she came to the Jack & Jill BBQ we had and to the wedding. It was so great to have someone like her in my life, a constant.

When I had Nikki, she came to visit at my mom’s house, to see her and bring her some presents. Two years later, during another visit, my daughter covered her in stickers while we chatted. She actually walked home like that: covered in those silly stickers. I implored her to take them off before she left, but she was adamant: “No! I’ll take them off later. I like Nikki’s stickers.”

She was more than a babysitter. More than a caregiver. She was and is an important influence in my life and while we lost John only just over a year ago, she is still going strong and living her life. When I turned 40 last year, she called, as always. She asked what I was doing for my big day and I told her we were taking Nikki to a cottage up north for a fun weekend.