I was a babysitter for many years in my youth. I was the oldest kid in my group in the neighbourhood. At 12 years old I started babysitting the younger kids. It was sometimes an awkward situation since some of them were my friends. I babysat for about five years. Less often as I got older since I started working at other jobs when I was 15 and so had less available time and made more money in my other work.

Now I am a dad (of three girls), and my wife gets questions from other women asking who is looking after her kids 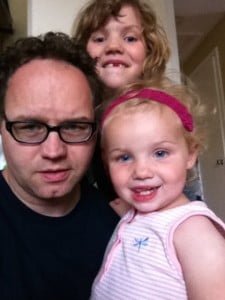 when she is out on her own. When this question is asked it is based on the assumption that the father of her children i.e. me couldn’t possibly handle parenting his own kids for an evening – parenting, not babysitting. As a dad, no one has ever asked me that question.

Fatherhood is changing in Canada and around the world. Dads are getting more engaged and taking active parenting roles instead of or in addition to the role of financial provider that was the case for our fathers and grandfathers.

According to Statistics Canada, men spent an average of 345 minutes with their families in 2005 and just five years later that number had increased to 379 minutes per day. Those  numbers don’t by themselves speak to men necessarily spending more time with their kids or how engaged they are when they are with their kids. The same time period also saw an increase in the participation rate of men engaged in housework and related activities from 77% to 81%.

Fatherhood is evolving and language matters. Referring to fathers who parent as babysitters undermines their role and provides an excuse to those fathers who shirk their responsibilities. Acknowledging dads as competent parents raises the bar for all fathers and respects those who are active and engaged participants in the lives of their children.

Chris Farley Ratcliffe is a father of three girls and blogs at www.dadgoesround.com. He writes about fatherhood, education, adoption, sexual health, and current affairs. Chris is also the sander-in-chief at www.ThomasWoodcrafts.com.